If you’re looking to treat a Spurs fan this Christmas, we’ve got the perfect solution! We’ll be welcoming two Tottenham Hotspurs legends to the our Spurs store, here at the Harvey Centre on Saturday 14th December.

With the football season in full swing, Tottenham Hotspurs are giving you the chance to meet some legendary players who know what it’s like to be competing at the very top of English football.

From 1pm – 3pm on Saturday 14th December you’ll have the chance to meet Martin Chivers, who was signed by Spurs manager Bill Nicholson in January 1968, for a club record fee of £125,000, which also made him the country’s most expensive player at that time. His pace and natural strength established ‘Big Chiv’ as a star of the Spurs side and England throughout the early 1970s. The 1970–71 season was the beginning of Martin Chivers’ golden years, for both club and country. He played in all 58 competitive games and scored 34 times, including both goals in the League Cup final against Aston Villa, and 21 goals in the First Division as Spurs finished the season in third place. Chivers also scored his first senior goal for England a 3-0 win over Greece in April 1971.

Pat Jennings, who spent thirteen years at White Hart Lane, where he played in 472 league games for Spurs, and 591 in all competitions will join Martin. He won the FA Cup in 1967, the League Cup in 1971 and 1973, and the UEFA Cup in 1972. He also scored once, in the 1967 Charity Shield, from his own area, kicking the ball from his hands and sending a large punt down the field that bounced over Manchester United goalkeeper Alex Stepney and into the net. In 1973 the Football Writers’ Association named him as its footballer of the year. Three years later he won PFA’s version of the award – he was the first goalkeeper to receive this accolade, and to this date remains only one of two, along with Peter Shilton. 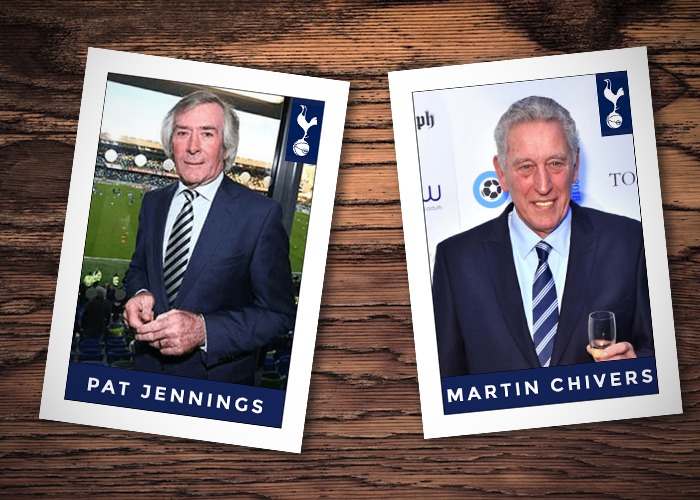